"I trust what people taste in the wine, so I instead want to give them a glimpse of the artistic spirit inside the bottle."

Kelby James Russell Wines first began as a casual brainstorm at Red Newt Cellars, where owner and winemaker David Whiting suggested that a separate wine project might be an important creative outlet for Kelby. With a diverse selection of vineyards and wine styles, the label promises to bring something new to the wine world; 'off-beat' wines both in reference to their musical inspiration as well as their individual spirit.

"Given my long love affair with Rosé, there was never any doubt what wine I would focus on..." 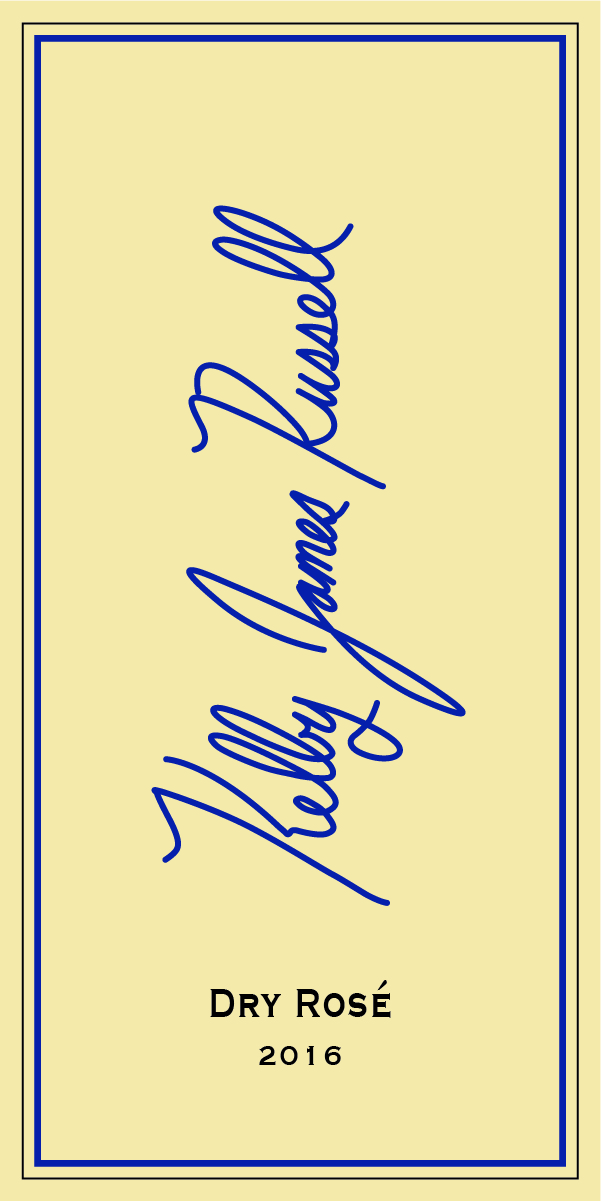 "Given my long love affair with Rosé, there was never any doubt what the first wine would be," said Kelby. "That it should also be sourced from 100% Cabernet Franc from the Nutt Road Vineyard, where my winemaking career started, only feels more appropriate."

Filled with intense strawberry, grapefruit, and floral aromas, this Rosé was bottled just after the start of the New Year to capture all these flavors and prepare it for a Spring release. Best enjoyed while listening to  "Vivir Lo Nuestro"  by La India and Marc Anthony 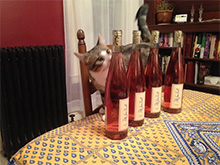 Kelby Russell was born and raised immediately north of New York's Finger Lakes Wine Region. After High School, Kelby attended Harvard University and received his Bachelors degree in Government with a minor in Economics. Having learned enough about both of these disciplines to realize he wanted no part in either, Kelby returned to his native Finger Lakes to pursue a wine industry career in the Finger Lakes.

As luck would have it, Kelby landed on the doorstep of Fox Run Vineyards and legendary winemaker Peter Bell the first day of harvest 2009. Despite expecting a formal interview and arriving in his Sunday best, Kelby quickly found himself covered in grape skins and realized he never wanted to leave. Kelby would continue to work for the next three years at Fox Run Vineyards learning invaluable lessons about winemaking, vineyard management, and life from Peter Bell, vineyard manager John Kaiser, and owner Scott Osborn.

While working at Fox Run, Kelby began taking annual 'vacations' to work additional harvests in the Southern Hemisphere. Kelby cut his teach as a supervisor while learning the intricacies and non-intricacies of New Zealand Sauvignon Blanc at Whitehaven Winery in Marlborough. The following year he worked at Pipers Brook Vineyards/Kreglinger Estates, a long standing Tasmanian producer of single vineyard Pinot Noirs and traditional method sparkling wines. Kelby finally reached the Australian mainland the next year as Nightshift Red Winemaker at Yalumba Winery's premium production site in the Barossa Valley; giving him experience with remarkable quality and old-vine red grapes from across Australia that he will never forget.

Kelby returned from Australia to take a permanent position at Red Newt Cellars and Bistro on Seneca Lake in Hector, New York. He now serves as Winemaker at Red Newt Cellars and treasures the opportunity to work at a 'Riesling House;' striving to make Finger Lake rieslings a part of dinner tables from the everyday to diverse single vineyard bottlings. Red Newt's continued work with fantastic growers of Gew端rztraminer, Pinot Gris, Pinot Noir, and Bordeaux varietals ensures that the cellar is always busy and always fun.

At both Red Newt and Fox Run, Kelby has been thrilled to work on the Tierce Riesling project between those two wineries and Anthony Road Winery. Along with this exciting collaboration Kelby has contributed to the wines of the new vineyard project Boundary Breaks, particularly the "Reserve 198" bottling that highlights the low alcohol style of riesling he will forever chase.

Kelby is a member of the Eastman Rochester Chorus, where he sings Tenor and continues his lifelong passion for music. This previously meant jazz saxophone improv during High School, major leadership roles within the Harvard Glee Club during college, and has always meant listening to any and all genres of music he can find - often to the confusion and consternation of those around him.

In a refrain common to teenagers everywhere, Kelby never expected to return home again after heading towards the big city lights of Boston. He now lives in Geneva, New York and is a proud member of the Finger Lakes community.

The hope for these wines is that they always have personality and speak for themselves. Nevertheless, hearing from those behind the scenes can be equally rewarding and allows us to feel more connected with those who enjoy the wines than is the norm in our profession.

We would love to stay in touch with anyone interested in these wines, and want to do so in a way as personal as the wines are. If you would like to receive a letter from us periodically with updates and musings from the vineyard and cellar, please enter your mailing address below. For digital updates, you may also include your electronic mailing address.

The 2016 Dry Rosé can be purchased online via Red Newt Cellars starting in April 2017.

To contact Kelby for any inquiries, email kelby at kjrwines.com.

For media, email leslie at kjrwines.com.